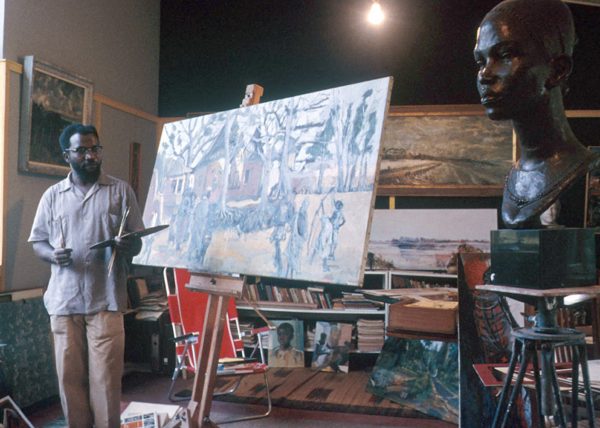 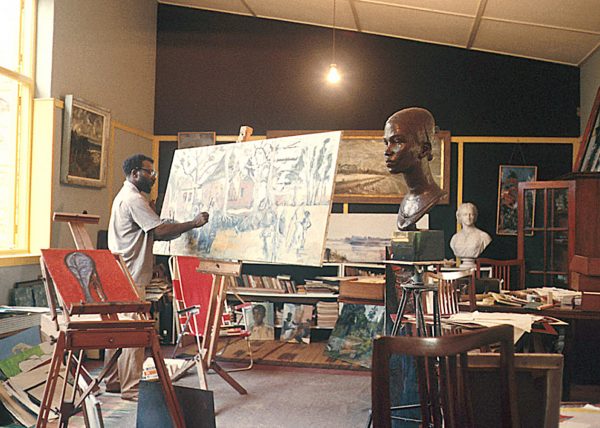 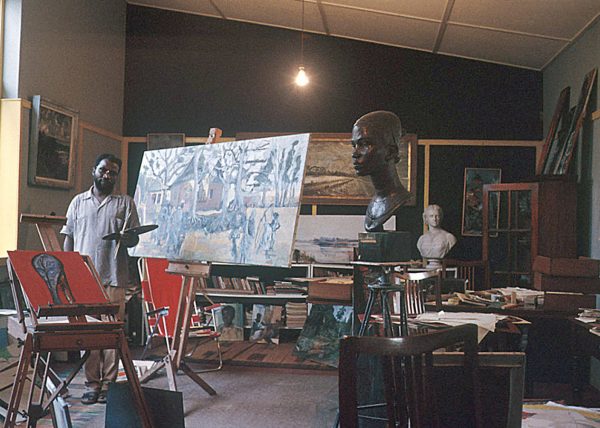 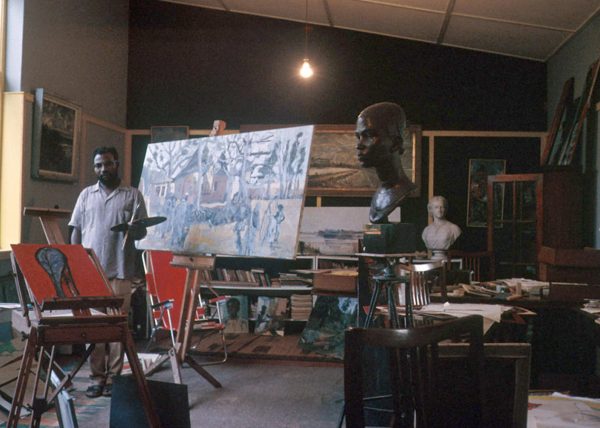 Benedict Chukwukadibia Enwonwu was born a twin on July 14, 1917 in Onitsha, Anambra State, Nigeria. His father, Odigwe Emeka Enwonwu was a reputable traditional sculptor and his mother, Iyom, a successful cloth merchant.

In July 1937, Murray exhibited the works of his students including Enwonwu at the Zwemmer Gallery in London. Enwonwu's work was also shown at the Glasgow Empire Exhibition in 1938, and the following year, he was awarded prize money and a bronze medal for his work now in the art collection of the International Business Machine Corporation in San Francisco.

In 1944, he was awarded a Shell Petroleum scholarship to study in the United Kingdom. In England, he enrolled at the Goldsmith College of Art, Lewisham, London and later the Ruskin and Slade Ashmolean, Oxford, where he studied fine art, aesthetics, history of (Western) art and anthropology, graduating with first class honours in sculpture. He continued his studies in London at the University College and the London School of Economics where he completed postgraduate work in social anthropology.

In 1946, on the invitation of Sir Julian Huxley, then director of UNESCO, Enwonwu represented Africa at the International Exhibition of Modern Art held at the Musee D'Art Moderne in Paris.

In 1947, he was elected Fellow of the Royal Anthropology Institute of Great Britain and Ireland (FRAI). He was also made a member of Hampstead Arts and Artists International.

Enwonwu lectured widely in the United States including Harvard University and New York University. He also lectured at the University of Ghana, Legon and attended many international seminars across the world delivering many papers on African art, culture and aesthetics. In recognition of his contributions to the advancement of art in Africa and the world, Ben Enwonwu was made a Member of the British Empire (MBE) in 1954.

At the height of his fame in 1956, he was commissioned to sculpt a bronze portrait of Her Majesty, Queen Elizabeth II, making him the first African to be so honoured. The sittings began at the Buckingham Palace and the resulting full-length bronze statue was shown at the Tate Gallery. Enwonwu was also a member of the Royal Society of British Artists (RBA).

His other major works include Anyanwu at the headquarters of the United Nations (UN) in New York, (Nigeria’s gift to the UN in promotion of world peace), Sango at the Power Holding Company of Nigeria (PHCN) headquarters in Lagos and The Drummer at the Nigerian Telecommunications headquarters (NITEL) in Lagos.

In 1966, he led the Nigerian contingent to the First World Festival of Negro Arts in Dakar, Senegal. In 1968, Enwonwu retired from the Nigerian civil service as art advisor to the Federal Government and was reappointed on contract that same year as cultural advisor. In appreciation of the artist's excellent status in matters of art and culture, the University of Lagos elected him, her first University Fellow in African Studies. In 1969, Ahmadu Bello University awarded him an honorary Doctorate degree for his writings on art. In 1971, he was appointed a visiting artist to the Institute of African Studies at Howard University, Washington D.C. That same year, the University of Ife (now Obafemi Awolowo University) appointed him her professor of fine art, indeed Nigeria’s first art professor, a post he held until 1975. In 1980, Enwonwu was honoured with the Nigeria National Merit Award by the Nigerian Federal Government, for academic and intellectual attainment.

Throughout his career, Enwonwu held several exhibitions in Nigeria and abroad and in 1991, a retrospective show spanning 50 years of creativity was held in his honour at the National Museum in Lagos.