Presenting the Sculpture of HM, Queen Elizabeth II by Ben Enwonwu MBE on the occasion of the visit of HRH The Prince of Wales 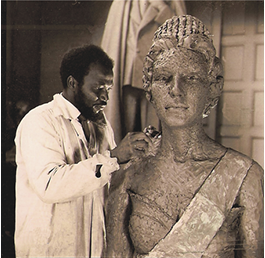 In 1956, Ben Enwonwu, MBE received his greatest portrait commission. Elizabeth II, Queen of England and Monarch of the British Empire. Enwonwu conceived the idea for the commission and proposed it to Alan Lennox-Boyd, Secretary of State for the colonies, to commemorate the Queen’s visit to Nigeria in January and February 1956. The commission was arranged in consultation with protocol officials at Buckingham Palace, with the intention to install the completed bronze statue in the Nigerian House of Representatives in preparation for independence in 1960.

The official announcement in the Times (London) stated: “Her Majesty the Queen has agreed to sit for a portrait in bronze to be executed by the Nigerian sculptor Mr Enwonwu in commemoration of the Queen’s visit to Nigeria in January and February of 1956.” The West African Review, in turn, announced that “the news that Her Majesty the Queen is to give sittings to the Nigerian sculptor, Mr Ben Enwonwu, sets the royal seal on the renown of West Africa’s most famous artist.”

In November 1956, the official announcement of the commission was made but the queen did not commence sitting for her portrait till the following year. Consequently, Enwonwu began his assignment in March 1957. The sittings were 12 in all, with the first few at Buckingham Palace, where he was provided a studio. Here he spent an hour each day sketching and modelling in clay. The preliminary sketches of the queen were produced in watercolours and captured her in profiles and frontal poses. He also prepared a small bust of the queen as a scale model to establish the pose and regalia. As the work progressed, it became necessary to relocate its context of production. Sir William Reid-Dick, Enwonwu’s colleague at the Royal Society of British Artists, made his studio at Maida Vale available, and the queen agreed to complete her next 4 sittings here. In this time, Enwonwu finished a portrait bust and a sketch model of the sculpture.

Enwonwu first presented his statue of Queen Elizabeth II at the 1957 annual exhibition of the Royal Society of British Artists in London. The West African Review noted Enwonwu’s inclination towards indigenous African symbolism but also praised his vision of modern art. The Times reported that the completed bronze statue conveyed the requisite sense of regal dignity required of commissions of this significance.

Benedict Chukwukadibia Enwonwu MBE was born in 1917. He is the most influential African artist of the 20th century. His pioneering career opened the way for the postcolonial proliferation and increased the visibility of modern African art. Educated at the Slade, University of London, he was one of the first African artists to win critical acclaim, having shown at prestigious exhibition spaces in Europe and the United States, and listed in international directories of contemporary art. Since 1950, Enwonwu was celebrated as “Africa’s Greatest Artist” by the international media and his fame was used to enlist support for Black Nationalists movement all over the world. In 1971, Enwonwu was appointed Nigeria’s first professor of art by the University of Ife, now Obafemi Awolowo University, and was awarded the Nigerian National Merit Award by the Federal Government in 1980. The Enwonwu crater on the planet Mercury is named in his honour. He died in 1994.